What does “Stoa” mean? 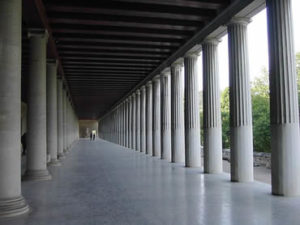 In ancient Athens, people would gather at public buildings to listen to politicians, philosophers, and poets. Greece’s Mediterranean climate rendered the interiors of these buildings unsuitable for crowds much of the year. Architects therefore designed the Stoa, the long covered porches fronting or surrounding buildings, often with a double colonnade, that became the symbolic feature of classical Greek architecture. Here, in a shaded but well-lit and well-ventilated space, people could gather to conduct business or test new or competing ideas. It was in such a setting where the Apostle Paul delivered his famous speech in Acts 17 when he challenged the beliefs of the Epicureans and Stoics. In the same way that stoa existed to provide a place for public speaking, debate and the exercise of rhetorical skills, Stoa exists to provide locally-organized opportunities for friendly forensics competition in public speaking and debate for privately educated Christian homeschooled students.

We are equipping our youth for things that matter

Learn More About Us